To The Brink & Beyond 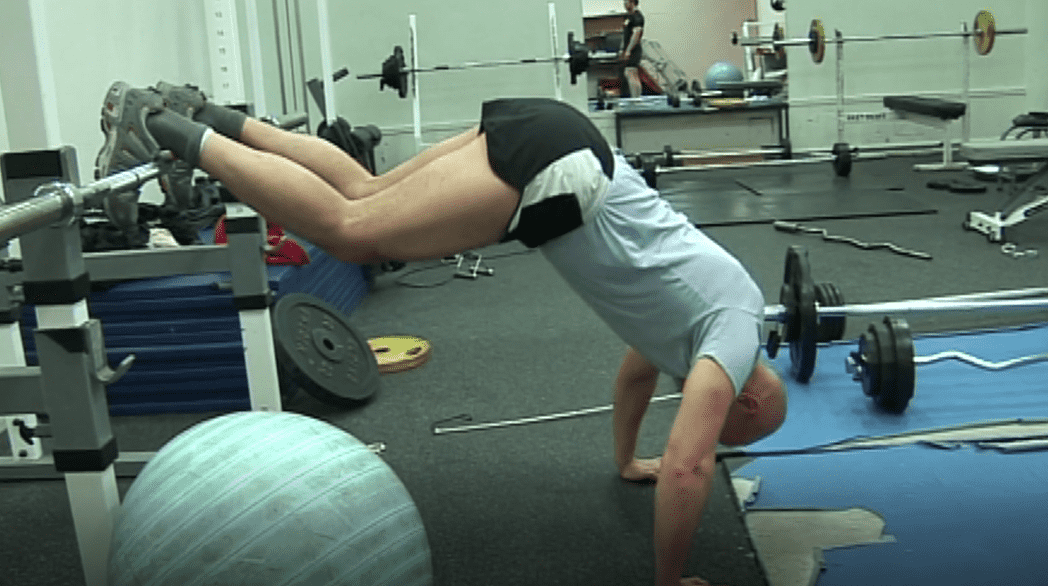 Since early February I’ve been getting my muscles ready for some real work. And so with six months to go it is time to push on. But I’m not exactly sure what this means …

Luckily a friend of mine called Simon O’Donnell, a professional strength and conditioning coach, has volunteered to set my programme and crucially he is training with me as well. I say crucially because I have had lots of well structured training plans in the past but without having someone to train with the ‘plan’ rarely becomes the ‘reality’.

Simon has come up with a training strategy that involves three phases up to the race. We are currently in phase 1, June and July. This is Simon’s ‘getting ready to train’ phase and he describes it as “muscular endurance and anatomical adaptation”. Whatever he calls it I am glad I didn’t start his version of ‘getting ready to train’ when I started four months ago. If I did I may not have made it through the first couple of weeks!

For June and July he has lots of weights to condition my muscles which I am happy to say includes lots of chin ups, press ups, dips and core strengthening– I love this type of training and it is what I’ve been doing for months now. However, a slight change is in the amount of leg work than I’ve been doing which makes sense as I’ll be on my feet for 10 to 12 hours a day later in the year! There is aerobic training on a cross trainer, swimming and rowing. And there is one specific interval session and one long walk pulling a tyre building to seven hours by the end of July.

Prior to setting the programme Simon and I linked up for our first training session back in mid-May just before I went on the Norway training camp. During this first session I wretched and was nearly sick. Although I enjoyed that first session because I know I have to push myself to the brink in preparation for racing to the South Pole, I was glad to go to Norway and not have to do the second intense session the following week.

However, avoiding the interval training couldn’t happen for long and the second ‘interval’ session took place on Wednesday 4 June. It was an evening session and i met Simon at 7pm at the rugby club where he coaches. On the way into the clubhouse to get changed for the session my stomach twisted with fear. I was remembering how tough my first interval session was and wasn’t looking forward to what was coming up.

By the time I was changed Simon had got the gear out. Two large punch bags were side by side at one end of the pitches. Beside them were two big dumbbells. We slipped on our sledge pulling harnesses and as we did the summer sunshine was replaced by torrential rain. And so the stage was set for my beloved Rocky style training…

I heard Simon’s stop watch bleep and he said “ready?” It wasn’t really a question, more an instruction! I moved forward to tighten the bungee running from my harness to the massive punch bag behind me. Another bleep of Simon’s watch and he shouted “Go!”

We ran side by side pulling the punch bags behind us. I could hear Simon’s feet pounding the grass and also the sound of his punch bag behind him. These noises allowed me to work out what direction I had to run in (as well as some timely instruction calls from Simon!). We had to run up to a designated point, turn and run back to the starting point. As we arrived at the turning point I felt OK. Through the turn Simon was shouting “right, right, right, right, right,…” and as we hit the straight my lungs were screaming for air and my legs were burning. Simon called “straight, straight, straight” until we were side by side again and heading back to the start point. By the time we were back at the start line I was feeling it and we hadn’t even got half way through our first interval.

It was straight to the heavy dumbbells for a timed 30 sec walk with the dumbbells held with straight arms at either side of my body. At best you could say my efforts here were a waddle. Simon walked along side me and we swapped at the end of the 30 secs. I was expecting my heart rate to return to normal as I walked back with Simon to our start point but it didn’t and before I knew it we were off for a fast run with me holding Simon’s arm for the entire run – around two and a half minutes.

For me running fast has not been part of my daily routine or infact my training for most of my previous events or ultra marathons. I’m a steady eddy and seem to run 10 kms, 20 kms or 50 kms at roughly the same speed. So, running ‘fast’ was a big shock to the system.

As I finished the first interval (bag pull, dumbbell carry and fast run) I was genuinely worried about my ability to do another seven of them. Our first had taken 4 mins 3 secs and Simon was keen to keep them fast. We had one minute off and got moving again. On the second we slowed to 4.08, the third 4.11 and on the fourth the trouble really started…

Simon was concerned that we were gradually slowing and having completed the bag pull and dumbbell carry on the fourth interval I was feeling rough…just in time for Simon to decide to push on right from the start of the run. As we ran around the rugby pitches my stomach started churning. On the back straight I began wretching and as we came around the final corner it happened. I hurled. Not a major puke but enough to count!

Even after me throwing up we held our time and came in with 4.11 on the fourth interval, same as the third. I actually felt a bit better on the fifth one and we went a couple of seconds faster which only served to fuel Simon’s enthusiasm! At the beginning of the sixth interval he came out with the classic “nearly there, lets push on on the last few.” It was this one, the sixth, when I truly pushed to the brink and beyond.

With Simon’s words ringing in my ear I got off to a fast start on the bag pull. The change over to the dumbbells was quick and I covered the greatest distance of the session. After Simon’s dumbbell carry I was ready to nail the run. Right from the start we pushed on. Along the edge of the pitches, round the corner to the short side of the course. We moved at pace onto the long straight at the far side and my stomach began to rumble again. As we approached the next turn the first of three major barfs occurred. One, two and the third as we rounded the final corner. The good news was we only slowed to a 4.15. With nothing left in my stomach we improved on the final two with a 4.05 and a final flurry under 4 mins at 3.59. And so it was over!

The reason for telling this story is not to make myself out to be a tough guy or anything. In fact it is to demonstrate the exact opposite. I have never been sick when training by myself…NEVER! Without Simon training with me I could not have even done the session as I could not see where I am going or where to return to!

I simply do not train to this level by myself and need training partners to work with and race against. Only last night I did a seven mile run with a couple of old school friends. Richard ‘Ricky’ Graham and Scott ‘Scotty’ Hanna – we clearly didn’t think too hard about nick names in our school – are training for the London triathlon. We ran out for 3.5 miles and then back again. It was all nice and easy on the way out and on the way back it got faster and faster. Scotty was guiding me and Ricky was infront of us who I know was thinking ‘if I push on here I might drop these guys’. You cannot develop that competitive edge on a tredmill and this is the really healthy part of training with other people.

I will not be able to do this race without hardening my mind and pushing my body. For me the only way to do that is to get out with guys like Simon, Richard and Scott where competition, pride and maybe a little bit of ego helps to push me on. The growing team is what will make this thing happen or not. Thanks to everyone who is involved so far either on the training side or on the business side!